Explore music and migration with this GRAMMY-nominated ensemble.

”The Aizuri Quartet has established a unique position within today’s musical landscape, infusing their music-making with infectious energy, joy, and warmth...

Explore music and migration with this genre-fluid GRAMMY-nominated all-female string quartet and Syrian-American clarinetist. Timely and moving, this program of newly commissioned pieces will showcase a range of styles by artists on the cutting edge of the chamber music world. Currently on tour with Wilco, catch these recent winners of “Best Classical Album” (NPR Music) during their Iowa debut! 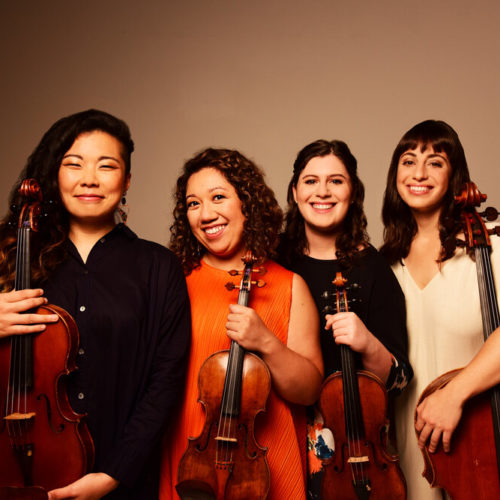 The Aizuri Quartet has established a unique position within today’s musical landscape, infusing all of their music-making with infectious energy, joy and warmth, cultivating curiosity in listeners, and inviting audiences into the concert experience through their innovative programming, and the depth and fire of their performances.

Praised by The Washington Post for “astounding” and “captivating” performances that draw from its notable “meld of intellect, technique and emotions,” the Aizuri Quartet was awarded the Grand Prize at the 2018 M-Prize Chamber Arts Competition, along with top prizes at the 2017 Osaka International Chamber Music Competition in Japan and the 2015 Wigmore Hall International String Quartet Competition in London. The Quartet’s debut album, Blueprinting, featuring new works written for the Aizuri Quartet by five American composers, was released by New Amsterdam Records to critical acclaim (“In a word, stunning” - I Care If You Listen), nominated for a 2019 GRAMMY Award, and named one of NPR Music’s Best Classical Albums of 2018.

The Aizuris view the string quartet as a living art and springboard for community, collaboration, curiosity and experimentation. At the core of their music-making is a virtuosic ability to illuminate a vast range of musical styles through their eclectic, engaging and thought-provoking programs. The Quartet has drawn praise both for bringing “a technical bravado and emotional power” to bold new commissions, and for its “flawless” (San Diego Union-Tribune) performances of the great works of the past. Exemplifying this intrepid spirit, the Aizuri Quartet curated and performed five adventurous programs as the 2017-2018 MetLiveArts String Quartet-in-Residence at the Metropolitan Museum of Art, leading The New York Times to applaud them as “genuinely exciting,” “imaginative,” and “a quartet of expert collaborators.” For this series, they collaborated with spoken word artist Denice Frohman and shakuhachi player Kojiro Umezaki, commissioned new works by Kinan Azmeh, Michi Wiancko and Wang Lu, as well as commissioned new arrangements of vocal music by Hildegard von Bingen and Carlo Gesualdo, which they paired with the music of Conlon Nancarrow, Haydn and Beethoven in a program focused on music created in periods of isolation.

The 21-22 concert season, featuring the Aizuri Quartet’s Expanse, What’s Past is Prologue, and Song Emerging recital programs, showcases the breadth of the Quartet’s musical appetite. Notable highlights include the Quartet’s major concerto debut with the Milwaukee Symphony Orchestra in performances of John Adams’s Absolute Jest, its debut at the 92Y, a collaborative program with Anthony McGill and Demarre McGill at the Philadelphia Chamber Music Society, and the premieres of new string quartets by Lembit Beecher and Paul Wiancko presented by the Phillips Collection in Washington D.C.

The 20-21 concert season illustrated the Aizuri Quartet’s ingenuity and creativity, as they offered presenters and audiences beautifully filmed performances along with spoken program notes for virtual concerts during the course of the pandemic. The Quartet appeared in virtual and hybrid concerts presented by Baryshnikov Arts Center, Tippet Rise, Friends of Chamber Music Denver, Kaufmann Music Center, Ohio Performing Arts, Philadelphia Chamber Music Society, New Orleans Friends of Chamber Music, Lincoln Friends of Chamber Music, Chamber Music Pittsburgh and Shriver Hall Concert Series, among others. Special projects included collaborations with Celtic harpist Maeve Gilchrist, as well as guitarist Nels Cline, with whom they recorded Douglas Cuomo’s Seven Limbs. Released on Sunnyside Records, the work was presented by the Caramoor Center for Music and the Arts, Center for the Art of Performance UCLA, Moss Arts Center and Aperio, Music of the Americas. Additionally, the Quartet designed virtual residencies in collaboration with the composition departments of Princeton University, University of Southern California and the NEXT Festival of Emerging Artists, workshopping and filming the works of emerging composers.

The Aizuris believe in an integrative approach to music-making, in which their teaching, performing, writing, arranging, curation and role in the community are all connected. In Fall 2020 they launched AizuriKids, a free, online series of educational videos for children that uses the string quartet as a catalyst for creative learning and features themes such as astronomy, American history and cooking. These vibrant, whimsical and interactive videos are lovingly produced by the Aizuris and are paired with activity sheets to inspire further exploration.

The Aizuri Quartet is passionate about nurturing the next generation of artists, and is deeply grateful to have held several residencies that were instrumental in its development: from 2014-2016, the String Quartet-in-Residence at the Curtis Institute of Music in Philadelphia, the 2015-2016 Ernst Stiefel String Quartet-in-Residence at the Caramoor Center for Music and the Arts, and the resident ensemble of the 2014 Ravinia Festival’s Steans Music Institute.

Formed in 2012 and combining four distinctive musical personalities into a powerful collective, the Aizuri Quartet draws its name from “aizuri-e,” a style of predominantly blue Japanese woodblock printing that is noted for its vibrancy and incredible detail. He has collaborated with Yo-Yo Ma, Daniel Barenboim, John McLaughlin, Aynur and Djivan Gasparian, among others. He leads his own bands Hewar and the Kinan Azmeh CityBand. He is a Silkroad ensemble artist with whom he won a Grammy in 2016. His recent orchestral album Uneven Sky with the Deutsches Symphony Orchestra Berlin has won Germany’s OpusKlassik Award in 2019.

Recent commissions include works for the Seattle Symphony, the New York Philharmonic and the Saint Paul Chamber Orchestra.

He is a graduate of The Juilliard School, the Damascus High Institute of Music, and Damascus University’s School of Electrical Engineering, Kinan holds a doctorate in music from the City University of New York.

His first opera, Songs For Days To Come was premiered in Germany in June 2022 to a great success. And he has recently been appointed to the National Council For the Arts on a nomination by president Biden.

This concert will happen at Sheslow Auditorium, a beautiful recital hall with 776 seats located on Drake University’s campus, just west of the Varsity Theater on 25th Street. Sheslow is physically joined to Old Main, with Sheslow located at the north end of the structure. Entrances are located on the east and west sides of the building.

Free parking is available on the adjacent streets, and in the large parking lot immediately to the northeast of Sheslow at the corner of Carpenter and 25th St.